skip to main | skip to sidebar

Just a quick email to bring you up to speed on what we've been working on.

Interclubs:
Sorry some of you are hearing this again, but wanted the club to know that the dates have been set for the Interclub road races. They are as follows:
Sunday May 2 Oro Short (BCC)
Saturday June 12 Lafontaine (MCC)
Sunday June 27 Beeton (NECC)
Sunday July 18 Moonstone/Vasey (MCC)
Sunday August 15 Epping (NECC)
Sunday September 19 Hardwood Hills (BCC)

As discussed at the AGM, these are fun races in "Group Pursuit" format, and serve as a good introduction for anyone interested in trying road racing.   More details to follow, but if you need more information you can respond to this email, or contact Brien Ross directly lbedross@rogers.com
Uniforms:
Thanks for everyone who came out to get fitted for jerseys, shorts, etc.  The order has been placed, and we have been given the expected delivery date of May 1st. Ish.  Unfortunately we did not meet the minimum order requirement for vests and jackets, so we won't be getting any this year. Arm warmers are included in the order we just placed, while other items discussed at the AGM, such as socks, will be pursued separately.

Memberships:
The club has submitted affiliation papers to the OCA, so we should be receiving membership cards shortly. Those of you who purchased a UCI license directly should be getting them in the mail soon. Remember our registration dates at the Rec Centre in Midland: March 25-26 7-8:30pm, March 27 10-1.  Looking forward to seeing you there!

That's all for now, get outside and enjoy the weather!

Live connected with Messenger on your phone Learn more.
Posted by MCC at 8:04 AM No comments:

Just before we put in the order for the uniforms, I want to let everyone know that Hidden Bay does in fact have arm warmers!  They are going to be $30 (pretty good, I'd say).  At the AGM, there were a number of people who indicated that they would be interested so I wanted to get confirmation of who would like them.  Please let me know your bicep and wrist measurement so we can be sure to get you the right size.

We will be taking orders until this Friday, March 5th so we can hopefully have a fast return on our order.

IM on the go with Messenger on your phone. Try now.
Take your contacts everywhere. Try Messenger for mobile
Posted by MCC at 9:07 PM No comments:

Labour day is deceptively late this year, and we had to cancel last night due to the crazy storms - therefore, the thursday night series has been extended one week. The finale will now be on Sept. 3rd. Come out for some good racing, tasty bbq, cake, as well as year-end awards, slideshow, etc.

On August 9th, over 450 racers from across the province travelled to our home track at Mountainview to take on the Ontario Cup, hosted by Chico Racing. Little did they know, that the course would be designed by our own Thomas Wood, and have all of the climbing, downhills, and technical bits that we know and love. This home track advantage would provide the catalyst for an awesome day of results for the MCC.
In the 8:30 start, 4 riders took to the start line. In the extremely competitive Peewee Mens category, Colby Matthews placed 14th, while Tyler Edwards placed 6th, a mere 37 seconds from 1st place. In the Beginner Men 19+ category, the always loveable Bill Ellery took 12th position. In Beginner Women 19+, Courtney Munro was 4th.
Next was the 9:30 start group. In this start, the MCC really heated up, despite the torrential downpours which threatened to shorten the race early into the 2nd lap. In Master 30-34 Sport 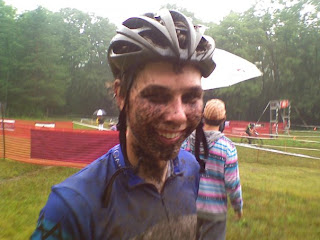 Men, Mark Cairncross placed 4th, only missing the podium by...well, ask Sean Ruppel. In 35-49 Sport Men, John Shier was 13th. The Master 40-45 Category had 2 strong finishes, with Mark Matthews finishing 6th, and Bill Cameron returning to the podium with a solid 3rd pla
ce performance. Dale Wood was having his best race in recent memory, riding in 2nd place at such a speed that his derailleur hanger vapourized at the worst possible moment, forcing him to abandon the race. Rich Guiot also saw difficulty in the heavy rains, and suffered a DNF. In the Singlespeed Mens race, with easily the most dominant performance of the day, was Davis Ross. He took the lead early on, and continued to put massive chunks of time into the field. Not only did he win his race by over a minute and a half, but he passed the entire 40+ Mens field who had started 2 minutes ahead. Also having phenomenal races were Angela Brewer and Erin Wood, who both placed 3rd in 20-29 Sport Women and 30-39 Sport Women, respectively. Erin was back on the bike after breaking her wrist only 4 weeks prior to the event.
The assault on the podium would continue during the 11:30 start. The rains passed, and the course went from being super slick, to super tacky, in a matter of minutes. In the Senior Sport Mens race, Brandon Parker was 19th, while Codey May was 12th. David Archer stole the show, racing his first Ocup in a few years to take the victory.
The final start of the day was at 1:30. The strong sun made for incredibly hot, humid conditions, 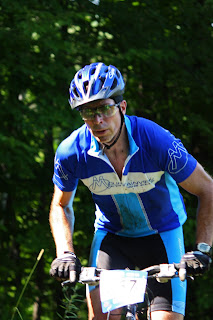 and the course was extremely slow and sticky, with little chance for recovery, and a long hike-a bike in the early laps. This caused greater than normal difficulties for the racers. In the Senior Expert Men category, Matthew Spak survived 2 laps before abandonning the race due to the
heat. Furthermore, in an upset, Thomas Wood finished 8th on his Misfit Singlespeed, beating out prerace favourite Lee Symmes, who finished 11th. In 30-39 Expert, Jeff Buchan raced to a 14th. However, John "clutch performer" Webb ensured that the MCC would not be denied a medal during the 1:30 start, recovering from a poor start to finish 3rd in 40-49 Expert Men.
After the race, members of the MCC shifted to the Wood residence for a BBQ, and to regale each other in stories from the day's racing.
Once again, an awesome day for the Mountainview Cycling Club. Along with the fantastic performances by our racers, the response from "out-of-towners" was overwhelmingly positive, once again impressed by our enthusiastic club, and tough, technical yet flowy trails.
Posted by TMAS at 10:04 PM No comments:

On July 19th, a hoarde of MRD riders travelled to Buckwallow Cycling Center, north of Bracebridge, Ontario, to compete in Ocup #5. This course has little climbing, but features the rocky, rooty terrain of the Canadian Shield that makes Muskoka so famously unique. MRD tore it up, with a litany of top 10's, top 5's, and podium placings.

In the first start of the day, Tyler Edwards and Colby Matthews competed in Peewee Men. In this highly competitive group, Tyler finished 16th, and Colby fought his way into the top 10 for his season's best finish. In Beginner Women, Courtney Munro finished 4th and Meg Whitton grabbed MRD's first medal of the day, finishing in 3rd place.

The 9:30 start group had the largest contingent of MRD riders for the day. In Singlespeed Men, Davis Ross blasted round the course for 4th place finish. Richard Guiot placed 24th in 45-49 Sport Men, while Mark Matthews and Dale Wood both had strong 7th place finishes in 40-45 sport and 50-54 sport men, respectively. Also in the 40-45 Sport Men category, Bill Cameron flexed his cycling guns to take the win! Of the females, Erin was sadly on the sidelines with a broken wrist, but hopes to be back in time for Mountainview. In Sr Sport Women, Angela Brewer represented well with a 6th place finish.

In the final start of the day, riders were treated to 4 laps of the rough, rooted course. Jeff Buchan placed 9th in the highly competitive Master Ex 30-39 category, while John Webb also placed 9th in 45-49 Ex men. In Sr. Ex men, Thomas Wood raced his rigid Misfit singlespeed to a tough 11th place finish, and Lee Symmes once again proved that he is the man to beat, winning the Sr. Expert Category.

The next Ontario Cup is at none other than Mountainview. With the strong performances at Buckwallow, combined with the home course advantage of our "tough and technical" track, the hardware should continue to pile up for MRD.

Reminder: When to ride at Mountainview, When not to.

I don't want to be a wet blanket, but this reminder is neccessary:

With the Ontario Cup on our home course fast approaching, there will be a definite temptation to sneak up to the hill and get a few laps in. However, we must remember that the trails are still closed, except during sanctioned races and sanctioned group rides. Riding at any other time is not allowed, and innappropriate. Remember, that by riding while the trails are closed, you risk having Mountainview closed to riding entirely.

Now, obviously we want to DOMINATE the standings at the big race! In order to help this happen, we are setting up some extra ride opportunities at Mountainview, so that you can get the course dialled in:

With this many opportunities to ride, there should be no reason to trespass on mountainview property in order to ride.

Attention all humans. We are your photos. Free us.
Posted by MCC at 9:28 AM No comments:

Hi,
Just a quick email to let everyone know that there is going to be a Buckwallow training ride this Sunday, July 12th at 11am in preparation for the OCup next weekend.  If you're interested in going, but can't work out a ride, let me know and I'll see what I can do to help with the arrangements.
Go MCC!


Windows Live helps you keep up with all your friends, in one place.
Posted by MCC at 11:49 AM No comments: